You’ve learned about the history of wrought iron on our blog before. Wrought iron is an undeniable classic. Known for their distinctive scrolls, spear-points, and beautiful design. Wrought iron is a timeless classic, and it can add an air of elegance to your home. Take a look at the stunning ironwork on these 5 palaces to give you some renovation inspiration! 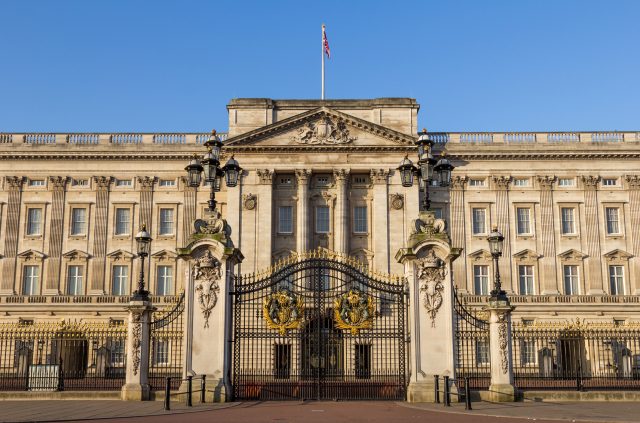 London has a beautiful array of wrought iron. Buckingham Palace is surrounded by a luxurious gilded wrought iron fence that features fleur di lises at the top to symbolize royalty.

Buckingham Palace isn’t the only locale with beautiful wrought iron though. Many of London’s parks feature elaborate wrought iron fences as well, like this gate at Green Park. 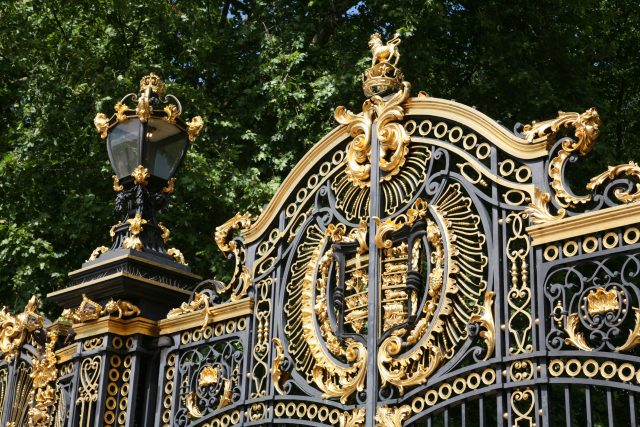 The Canada Gate was presented to London as a gift from Canada. The gate is part of a vast memorial scheme dedicated to Queen Victoria. The gate is in the same style as those of Buckingham Palace and bears the emblems of the seven Canadian provinces of the time. The inner columns are crowned by gas lanterns of similar design to those on the pillars of the palace railing.

Standing on the banks of the Fontanka River in St. Petersburg, Russia, the Sheremetev Palace is certainly opulent. In 1838, Geronimo Corsini added the wrought iron fence to the palace’s original building which dates back to the 1740s.

The palace was built in a magnificent baroque style, with beautifully patterned walls and ornate moldings. The palace hosted concerts and literary soirees. Today, its artistic history lives on in the current use of the palace as part of the State Museum of the Theater and Musical Art. 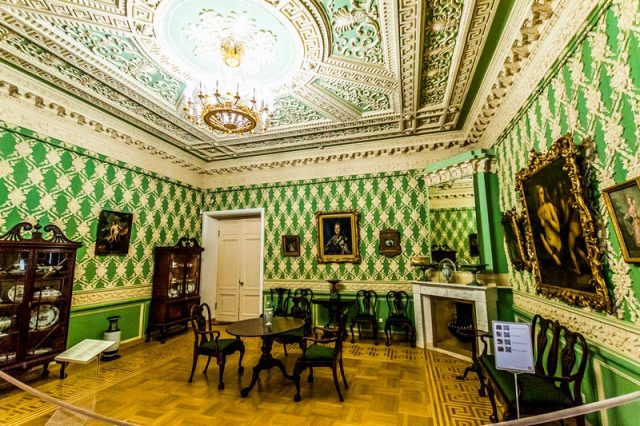 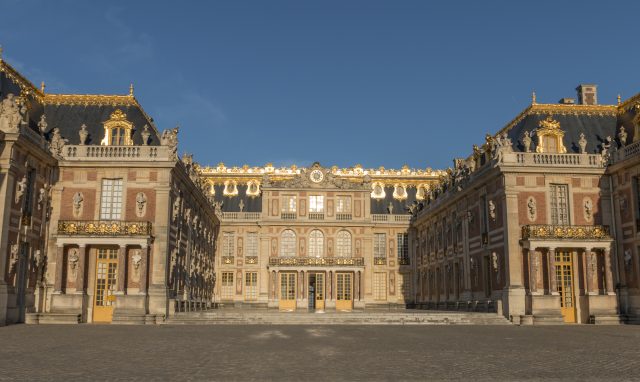 The Palace of Versailles was built a little before 1682 when King Louis XIV wanted to move the royal court from Paris to the wealthy suburb. The palace was greatly expanded by Louis XIV, and what we recognize today as the Palace of Versailles is mostly the result of these expansions. The palace is surrounded by a royal golden gate that was recently restored. A replica of the original 80m wrought iron and gold leaf gate now welcomes visitors and tourists to what was once Louis XVI’s home and power base. 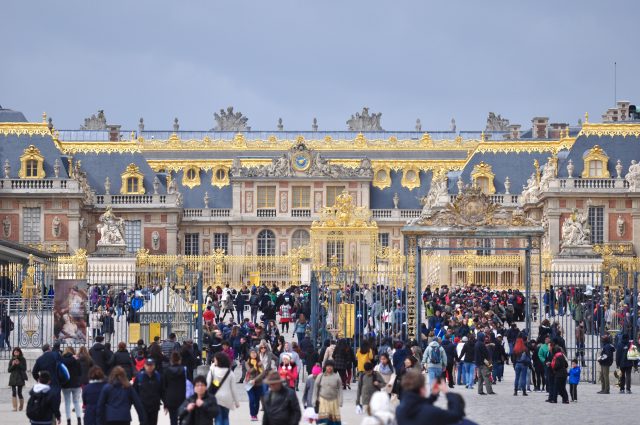 The palace is surrounded by a royal golden gate that was torn down during the French Revolution. A replica of the original 80m wrought iron and gold leaf gate was recently restored, and now welcomes visitors and tourists to what was once Louis XVI’s home and power base. 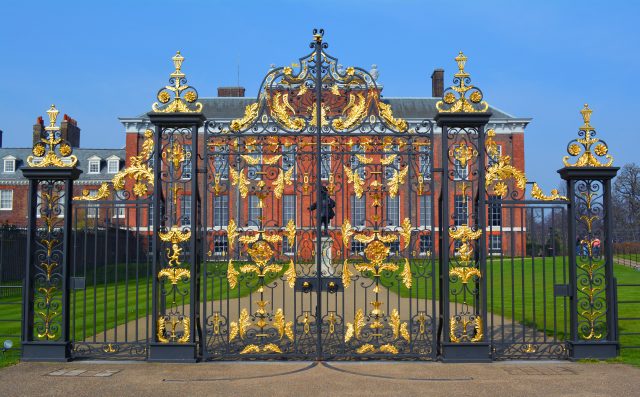 Kensington Palace is currently the home of Prince William and Kate. The palace started out as a home built by Sir George Coppin in 1605. When William and Mary assumed the throne as joint monarchs in 1689, they needed to find a residence that was a better fit for William’s health. William was an asthmatic, and Whitehall Palace gave him trouble with his asthma because its location near the River Thames caused heavy fogs and flooding.

The palace went through three distinct phases of development. The first phase was the additions that William and Mary made to the mansion upon moving in. They added a three story pavilion at each of the four corners. The Queen’s apartments were in the North-West, and the King’s were in the south-east. Architect Sir Christopher Wren built these wings to flank the house in a particular way that would allow for a proper ceremonial courtyard to be built.

The second round of additions came after William III’s death when the residence was transferred to Queen Anne. She had Christopher Wren finish the extensions that William and Mary had begun, resulting in the section known as the Queen’s Apartments. She also commissioned the addition of the Kensington Palace Orangery.

Finally, George I added three new staterooms the Privy Chamber, the Cupola Room, and the Withdrawing room, he hired the then-unknown William Kent to decorate the rooms.

Princess Diana also lived in Kensington Palace, and when she died you could not see the gardens as the grounds were covered with tens of thousands of floral tributes. 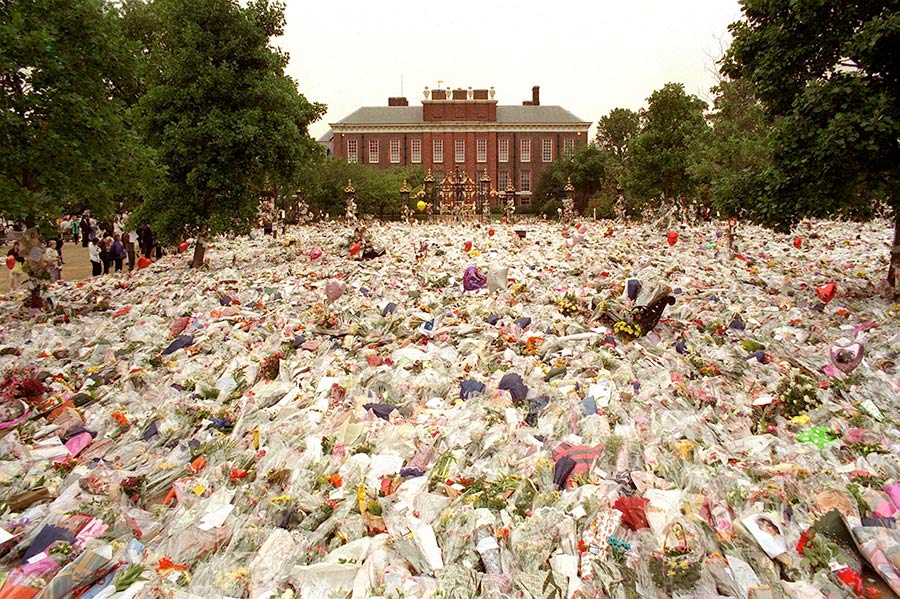 The gardens and enclosing fence have since become a place of homage to young Diana. 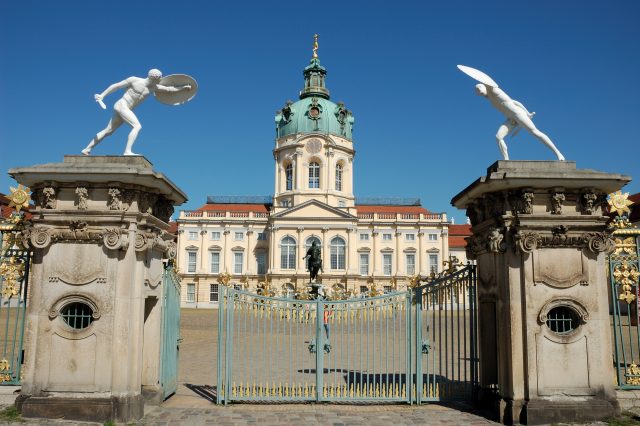 The Charlottenburg Palace features a beautiful wrought iron gate with gilded features and a patina.

The palace was commissioned by Sophia Charlotte, the wife of Friedrich III (Frederick I of Prussia). The original palace was 2 1/2 stories with a central cupola. Two years before appointing himself as King in Prussia, he sent the royal architect Johann Friedrich von Eosander to study the architectural developments in Italy and France, particularly the Palace of Versailles.

On his return, Johann Friedrich von Eosander began to extend the palace. The main palace was extended on both sides, and two side wings to enclose a courtyard were added. Sophie Charlotte died in 1705, and the palace was re-named in her honor (it was originally called Lietzenburg). The orangery was added, the dome atop was made bigger, and the vestibule was expanded. A gilded statue (visible in the photo above) was added to top the dome.

The palace was badly damaged during WWII, and it was restored in the early 1950s under the direction of Margarete Kühn, the Director of the State Palaces and Gardens.

If you need iron fencing, contact Tampa Steel & Supply today. Our team of knowledgeable and friendly experts is here to help with your steel and metal supply needs. Whether you’re following in the footsteps of Marie Antoinette and hoping to add a lavish fence to your home, or are in pursuit of something more classic, Tampa Steel and Supply is ready to help turn your home renovation dreams into a reality.

From sheet metal, aluminum tubing, and anodized aluminum, to steel pipes and wrought iron fencing, we have got you covered. Call us today to learn more, or fill out our simple online query form to request a quote.