The appearance of wrought iron is undeniably a classic. Picture black picket fences with scrolls and rosettes, spear-pointed window bars, and swirling spiral staircases leading to a garden terrace. When we think of wrought iron we think of elegance, fine detail, and timelessness. What we use wrought iron for today, however, is a far stretch from the sturdy metal’s beginnings.

While other metals, like steel, have since proved easier and more efficient to build with, back in its heyday, wrought iron was king.

Casting was one of the most widely used forms of metalworking, which involves superheating the metal until it’s liquid and pouring it into a mold where it will cool to shape. Casting is a process that is over 6,000 years old! The earliest metal casting artifact is a frog that is believed to have been created in Mesopotamia in 3200 BC.

Although wrought iron didn’t come to Europe until about the 15th century, and didn’t see wide use until the 16th century, another form of iron was used all around China.

The Chinese have been crafting iron weapons since the 5th Century BC. The blast furnace was invented in the State of Wu, China around 500 BC. It was used to create cast iron and pig iron (which is just cast iron before the impurities have been removed).

The cast iron was pretty strong under compression (forces pushing down on it), but it was not easy to get a sharp edge on cast iron. Cast iron was too brittle for weapons because it is particularly vulnerable to breaking when being struck – so it was mostly used for cooking pans and decoration.

4,500 years ago Chinese tribal clans used mostly stone weapons, with some bronze – but that all changed when the great war between the Shang and Zhou dynasties broke out. Historians have found records describing a spectacular assault of “300 chariots, 3,000 heroic men and 4,000-5,000 soldiers with armors to crusade” against the Shangs led by Wu Wang of the Zhou dynasty.

Buried in a coffin with one of these brave Zhou warriors was “the first iron sword of China”. It was discovered wrapped in a packet of cloth next to him in the wooden coffin. The blade is 13 inches long and has a bronze core that is overlaid with iron. The handle is beautifully decorated with pieces of jade and turquoise. According to tests conducted by the University of Science & Technology Beijing, the sword was made manually with smelted iron – making it the oldest man-made iron relic discovered to date! 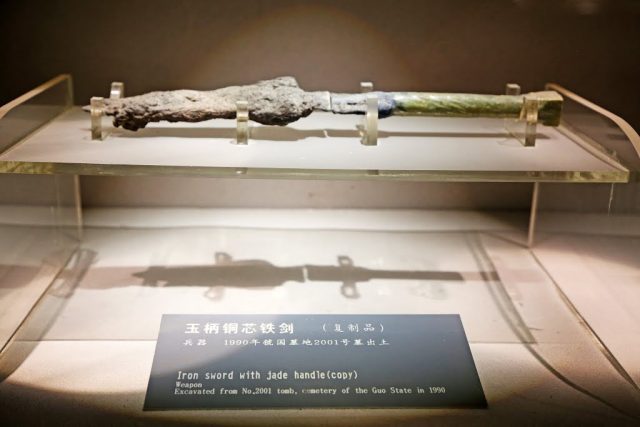 Ironworking grew to a new level of importance about 300 years later, in 475 BC during something called the Warring States period. Earlier tribal warfare only had battalions ranging from a few hundred to less than 2,000 troops. This “Warring States” period saw a development in warfare that looks much more similar to war today, with armies of hundreds of thousands instead of a thousand. The size of the armies between the 5 warring factions in China ranged from 300,000 to over 1 million!

This increasing importance of warfare also led to the development of new, superior casting processes like wrought iron, crude iron, wrought steel, cast iron, tempering, smelting, and more. Some of the best and most famous Chinese swords were created during this period, like the Tang Xi style of sword. 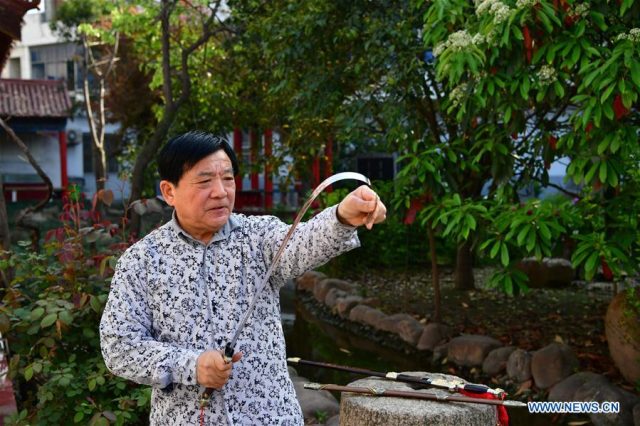 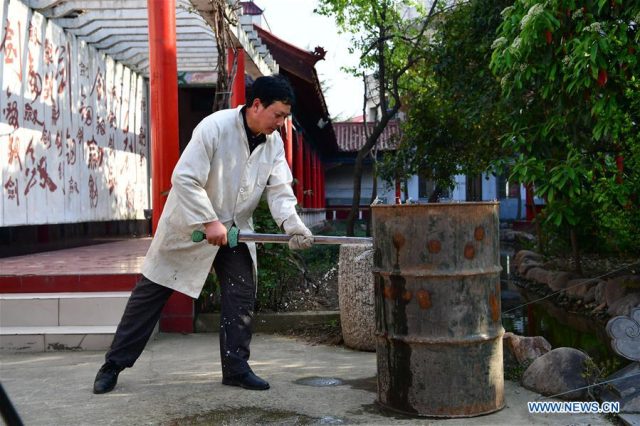 Wrought Iron is a Working Metal

The technology of cast iron was brought to the west from China around the 13th century. Chinese travelers noted an iron industry in the Alburz mountains close to the Caspian Sea – almost a ground zero of iron technology coming to the west.

The use of iron was popularized in England, where King Henry VIII began casting cannons and cannonballs from iron. Eventually, the English developed blast furnaces to process the weaponry faster. Henry VIII popularized something called “device forts”, which are fortifications that use cannons and artillery to defend against invaders. One of the more famous artillery forts is Deal Castle, which was built by Henry VIII between 1539-1540.

The term “wrought” comes from the past tense version of the term “to work” in old English. Over time, “wrought” was replaced with the word “worked.” So, essentially, “wrought iron” simply means “worked iron.”

In the early years, wrought iron was used mostly to make weapons and tools. In the medieval period, the metal gained more uses. The medieval people began using it to cover doors and windows to protect buildings against attack. Picture the door to a medieval castle. Along with dark, arched wood, perhaps surrounded by stone, you probably also see black metal bars and bolts. Wrought iron! 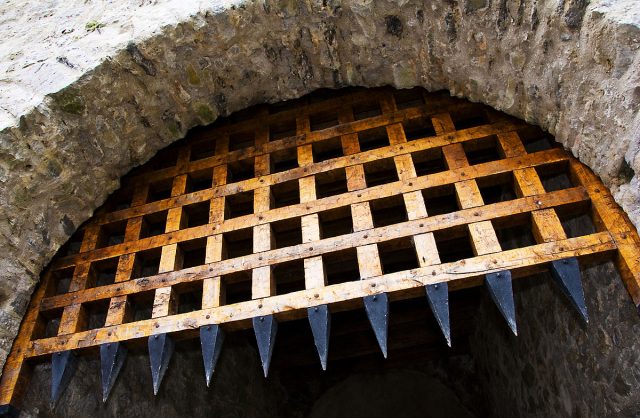 These days, blacksmiths were almost like magicians. People saw it as a miraculous feat to be able to turn such a hard, heavy material into something so strong and beautiful.

Wrought Iron is Brawn and Beauty

While the medieval people are responsible for beginning to use wrought iron for protective purposes, they were also the first to begin using it decoratively.

During the 16th century, iron adopted a reputation for sophistication. In addition to molding the railways and bridges that powered a city, wrought iron was also used to build the extravagant cathedrals of Spain, the intricate railing and fences of France, and so on. 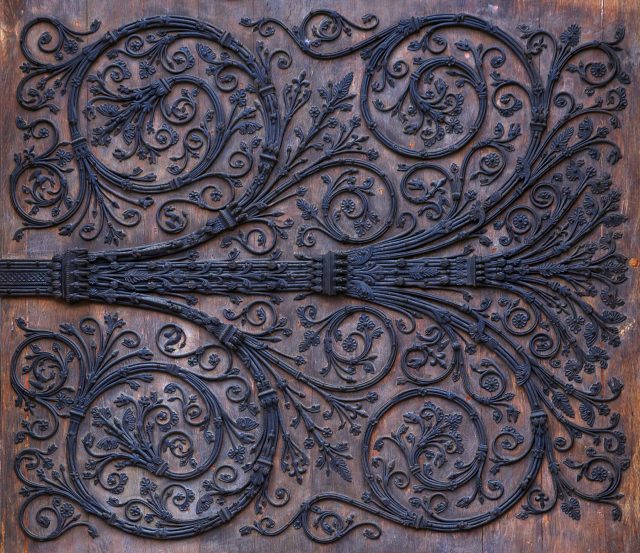 Wrought iron technology was eventually brought to the United States in the 18th century. Inspiration from wrought iron’s early days can still be seen in places like New Orleans, where French design still lives. 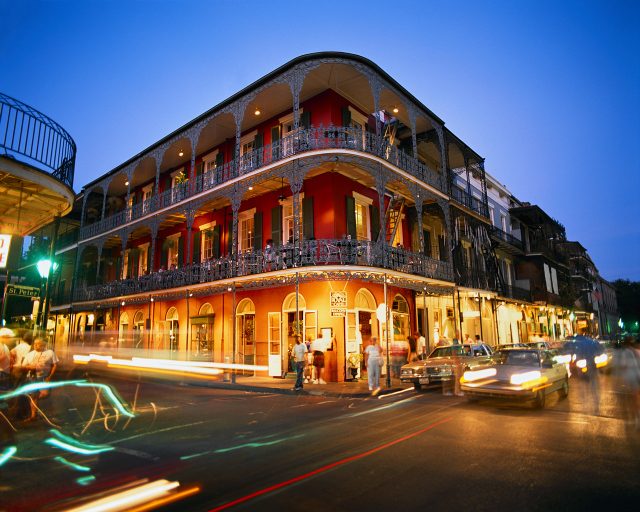 Before the developments of the industrial revolution allowed steel to take the top spot, wrought iron was the most commonly used malleable metal. It reached its high point around 1860 when ironclad warships and railways were in high demand. Soon, it was being used all over the world for cooking utensils, locks, stoves, and other hardware.

As steel became easier to produce, wrought iron’s popularity diminished. By the 1970s, wrought iron was rarely being used for anything other than restoration and decorative purposes. Today, we may still encounter wrought iron in antique furniture, lighting fixtures, and ornamental work.

At Tampa Steel & Supply we’re keeping the classic, elegant look of wrought ironwork alive! Wrought iron is one of the many materials we use in our breathtaking ornamental metalwork. Visit our showroom to see a sample of the beautiful, timeless wrought iron fixtures we can create for you.