Horizon: Zero Dawn is an open world role-playing game that’s set in a far future post-apocalyptic Colorado. It follows the story of a girl named Aloy (a play on words of alloy) as she fights fantastic metal beasts and tries to find her way in the tribal society she lives in.

You wouldn’t know this game was about the apocalypse at first glance, though.

Horizon is full of beautifully lush landscapes. A distinctive stone age sci-fi vibe permeates the game as you explore the overgrown remnants of the America we know today.

The developers call this blend of Planet Earth and dystopia post-post-apocalyptic.


Aloy is the main character of Horizon. She begins the game as an outcast, but you learn that she is a member of the “Nora” – one of the tribes in the game’s world. 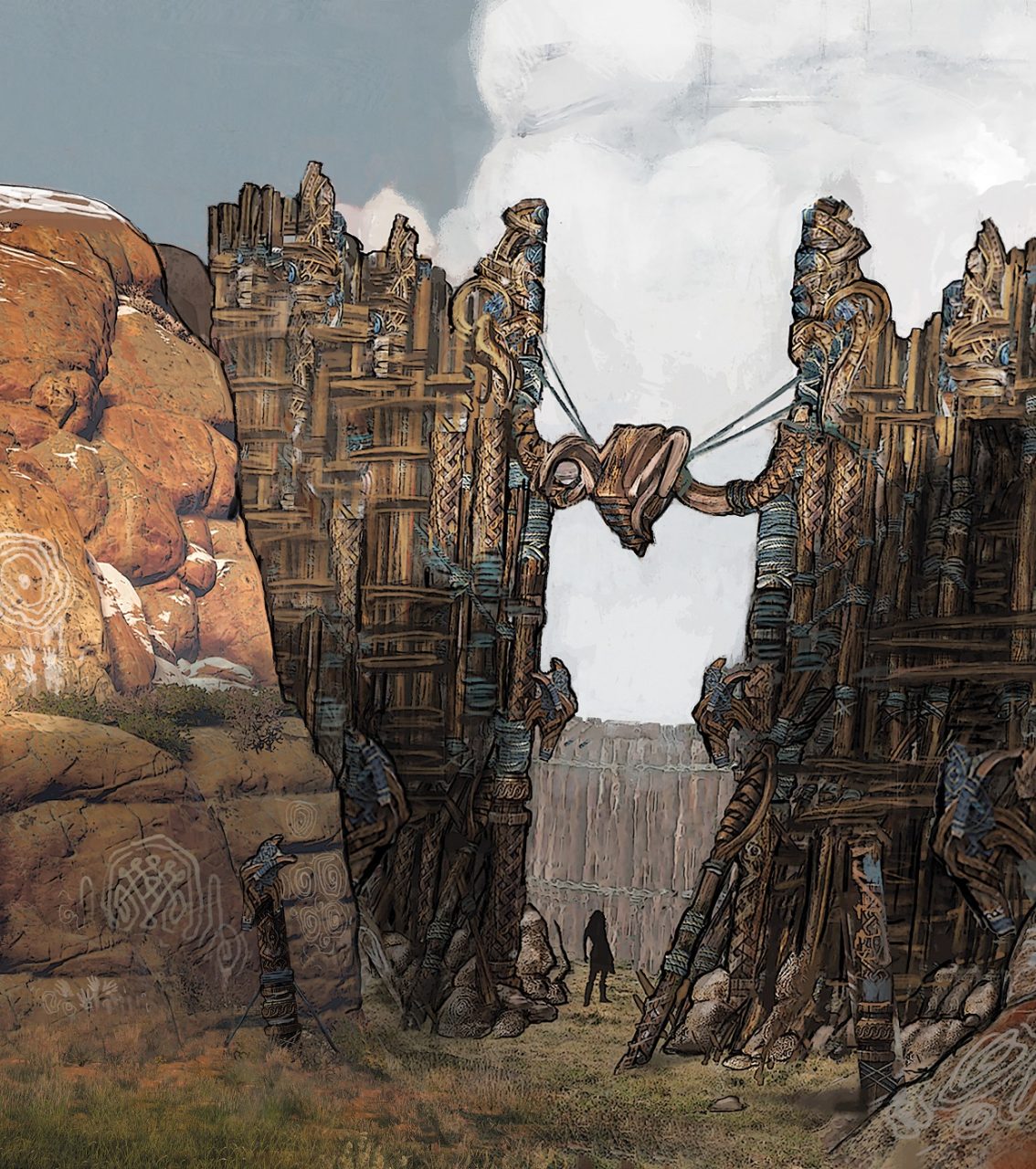 The writers of Horizon: Zero Dawn did a lot of anthropology research when creating the world of the game, that’s what breathes so much life into it. You can see the result of the detailed research in the lore of the matriarchal Nora tribe. 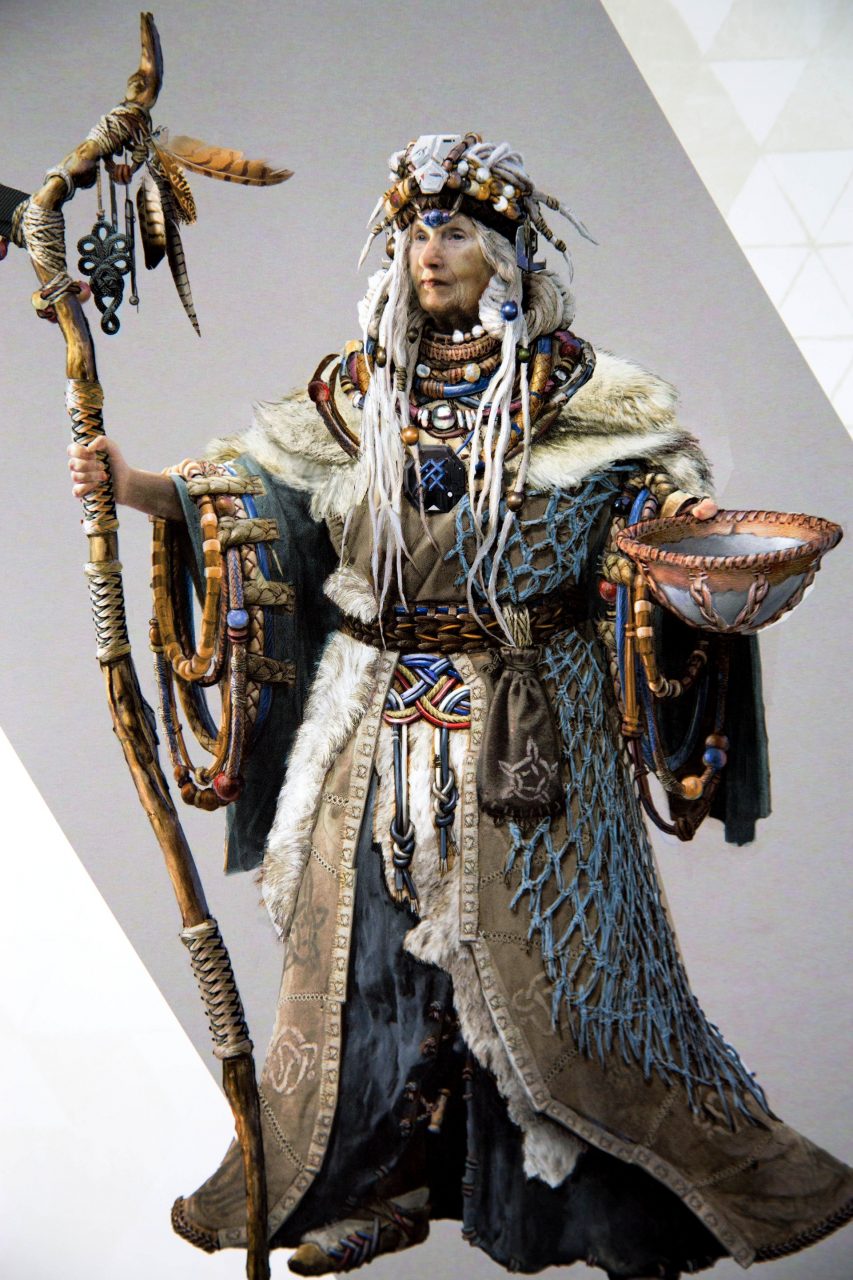 The creature design is another element that breathes life into Horizon: Zero Dawn.

The developer of Horizon is Guerrilla Games, the studio famous for the Killzone franchise. Creating machines is kind of in their wheelhouse.

The developers first decide the lore of the world that the creature lives in, then the function, and then the form comes.

Why are the machines there? What are they aiming to do, and is that ecology self sustaining?

Horizon is about the result of another species taking over.

This robot species has their own society with rules. Every animal has a unique function within the ecology.

Watchers are weak creatures but they’re quick, so they serve as scouts for herds of other types of machines. Shell walkers carry resources between locations.

There’s a purpose for all of the creatures, and they’re trying to do something very specific.

Once you know their role in the ecosystem, you can start designing what they look like, and how they behave.

The Metal Machines of Horizon: Zero Down 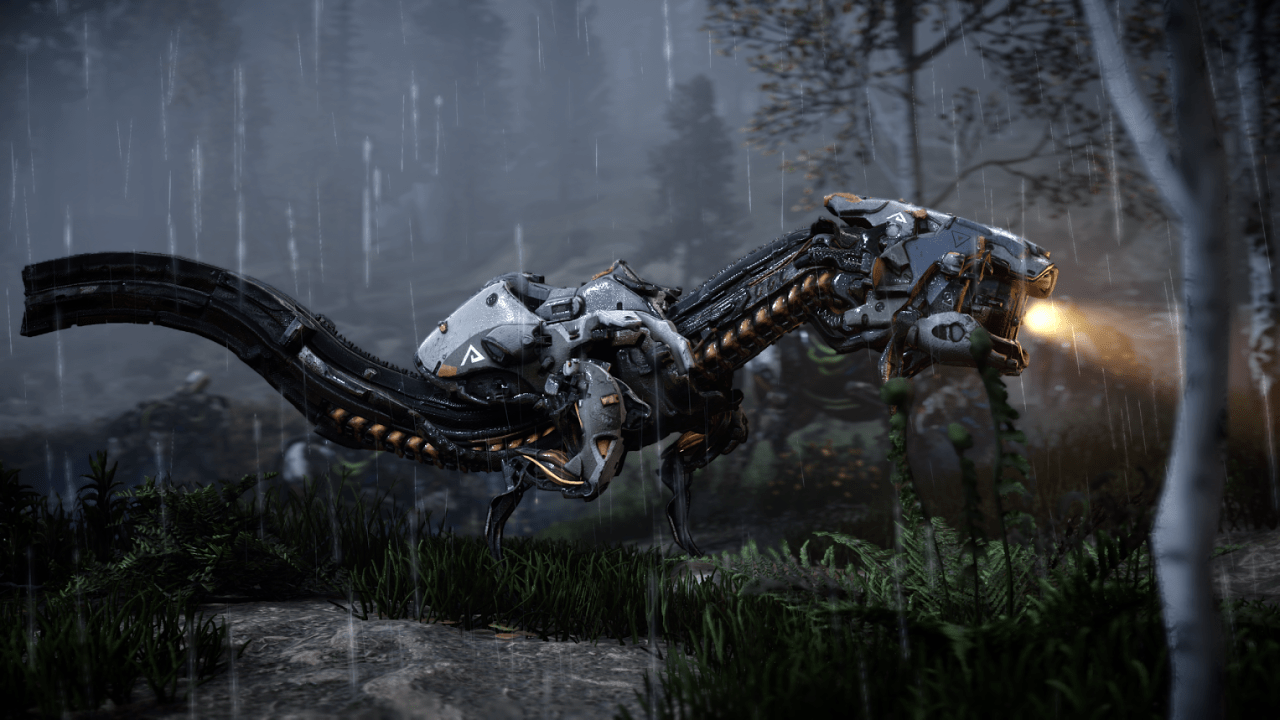 Watchers are some of the first machines you see in the game. They don’t have many weapons, but they’re able to easily detect threats and report them back to larger, stronger machines. 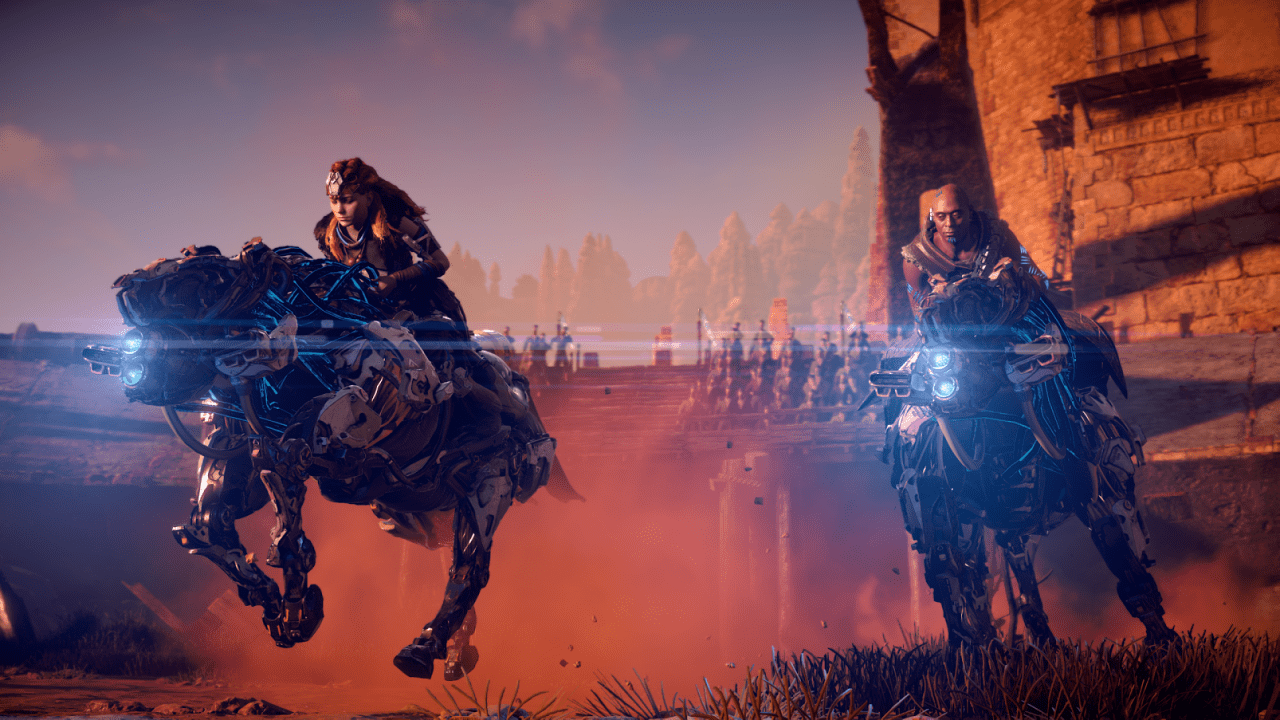 Striders are horse-like machines. During the introduction of the game, Rost (Aloy’s father-like-figure) first teaches Aloy to take down machines by tag teaming a herd of striders. 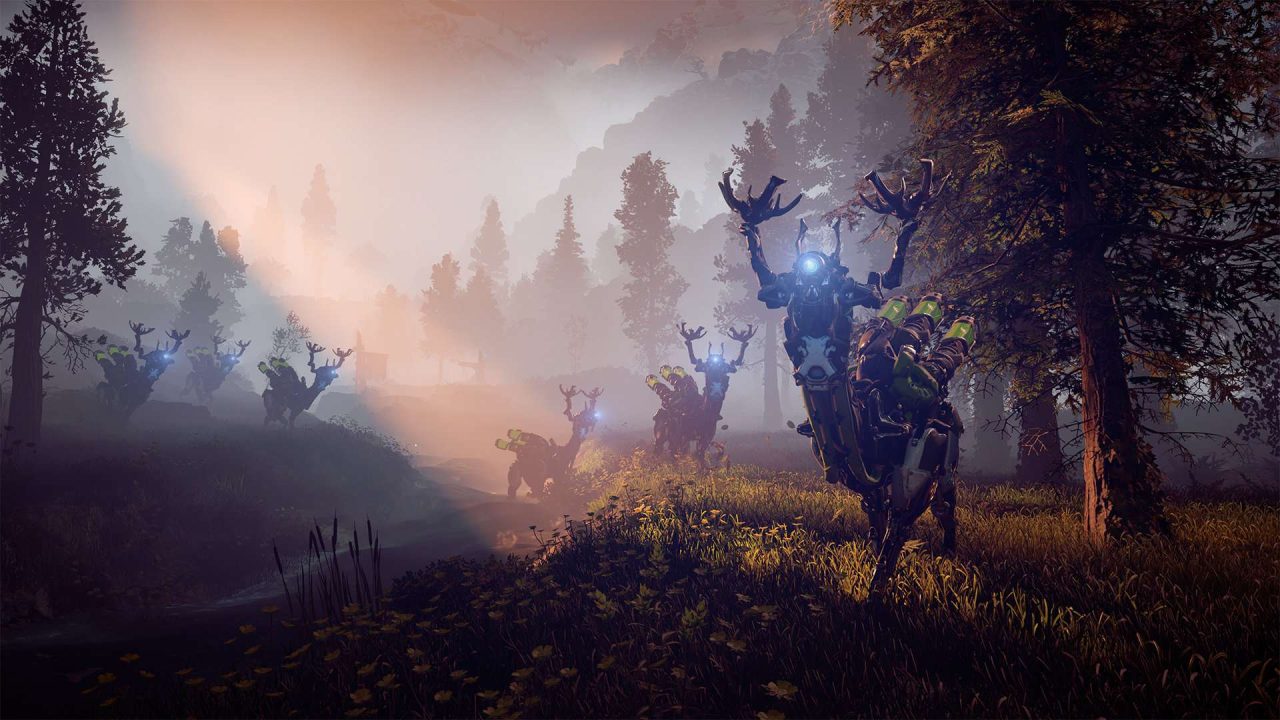 Grazers are peaceful deer animals, who will run away when approached. Hunters in the “new world” prize grazers for the valuable energy canisters they have on their backs. They create energy by grazing on grass as they roam the land, and the energy is stored in their canisters. 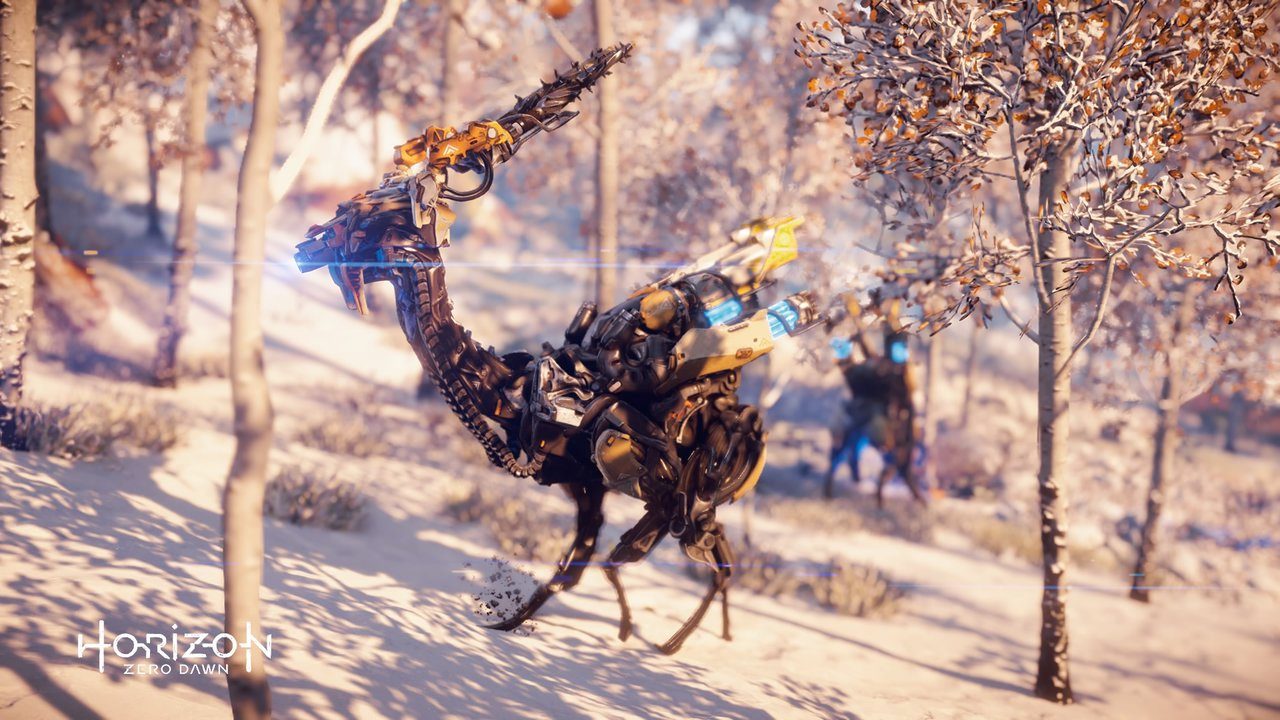 Lancehorns are another non-aggressive machine species. They are very skittish and will run away from humans unless provoked. The horns are corkscrewed like a drill because they were designed to dig up soil for mining and terraforming. The slender legs, long neck, and parallel horns resemble an antelope or a gazelle. 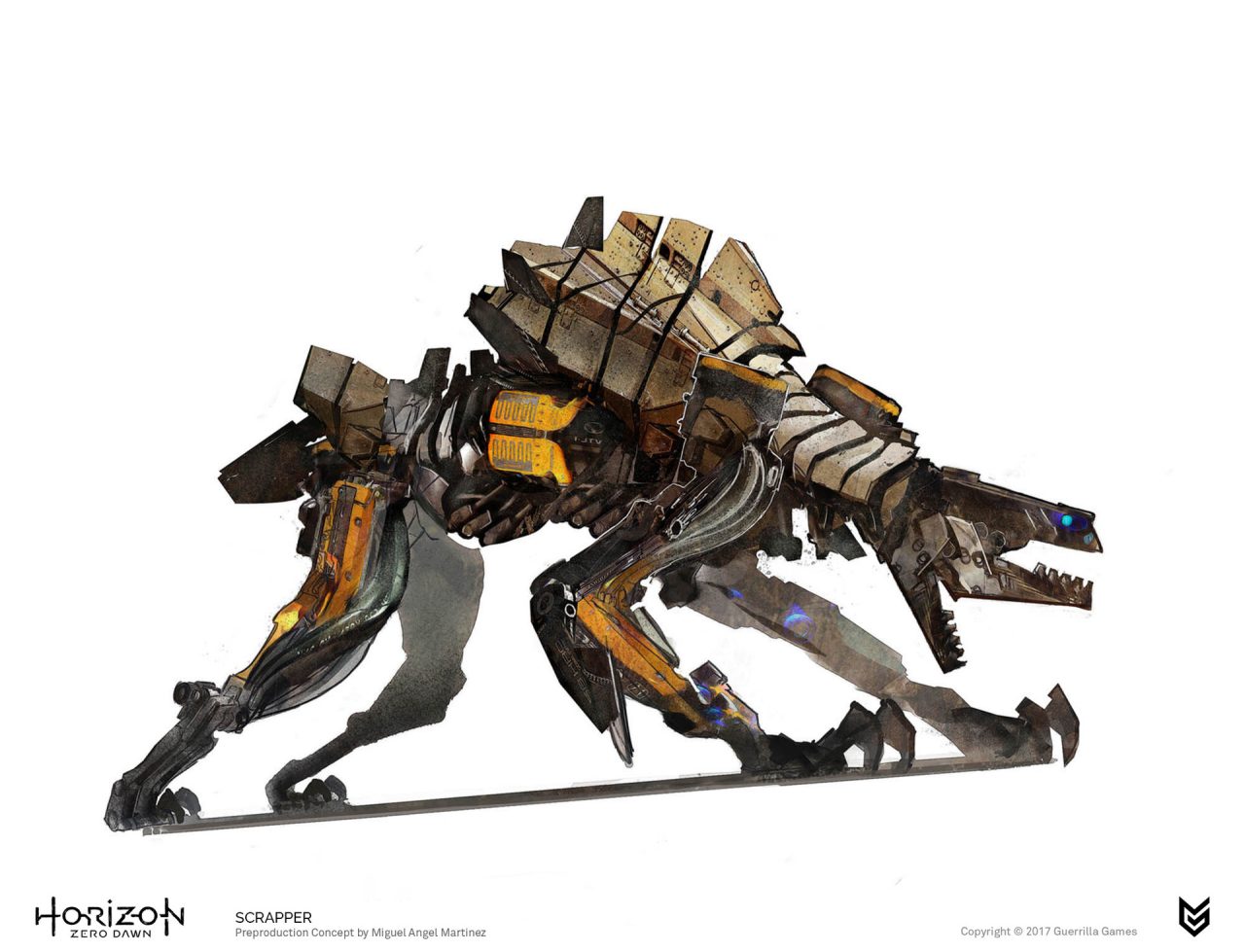 Scrappers are a scavenger species of machine that relies on the crashed corpses of machines to survive. Their hunched over posture resembles a hyena. 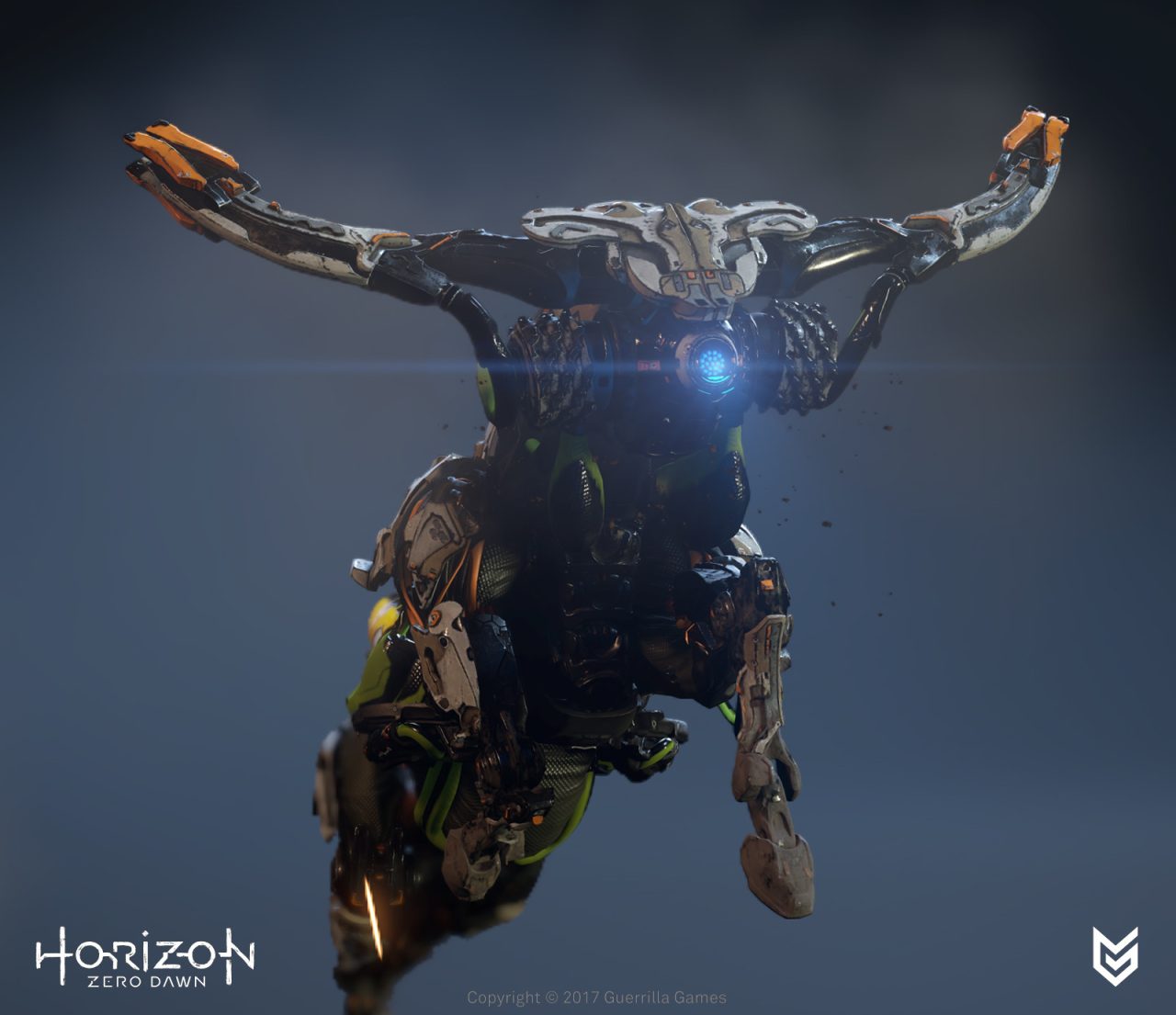 Broadheads are extremely fast machines that are based on Longhorn cattle. Their bull horns deal a deadly blow to humans! 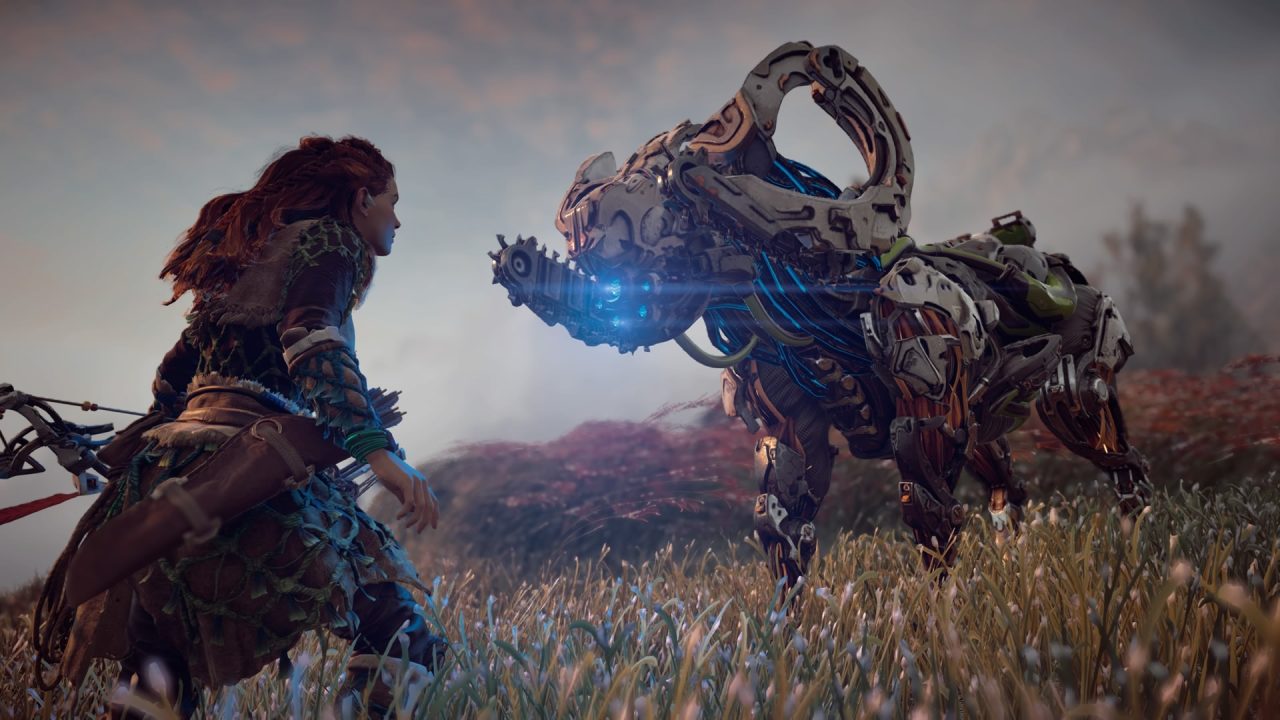 The Charger is another machine that relies on a horned attack. This machine is based off a ram or yak due to the curved shape of the horns. 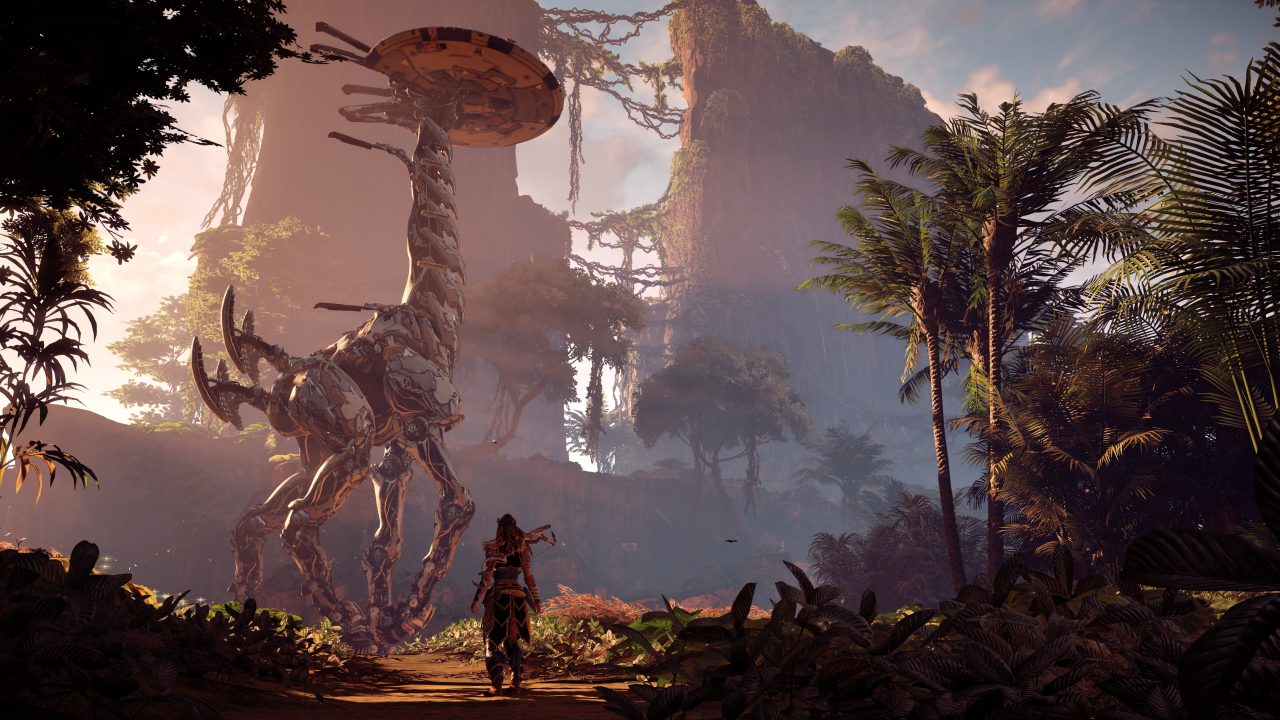 Tallnecks and Longlegs are by far the largest machines in the game. They are considered a “colossal” class recon machine. The tall, flat platform of their heads serves as a mobile communications center.

They are also the most docile of all machines. They take no notice of their surroundings because they have no eye sensors, and are invincible to physical attacks. 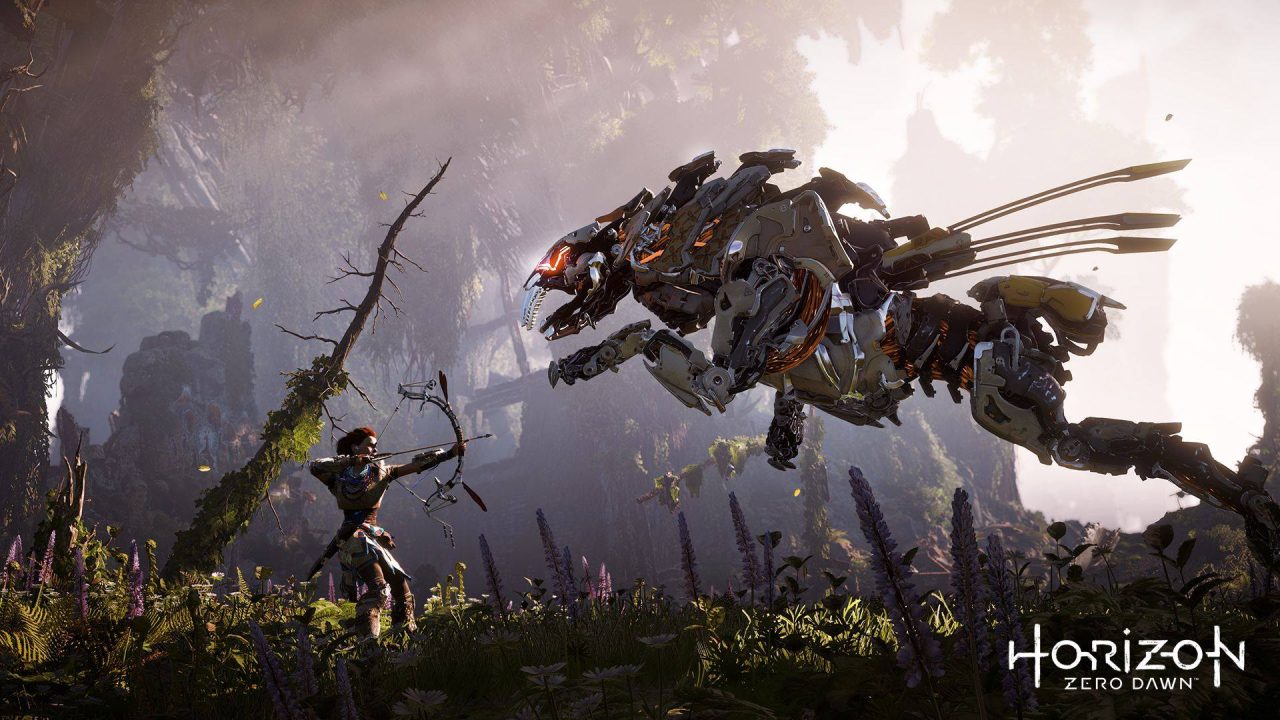 This machine is built for speed, agility, and aggression. Sawtooths have a broad chest, neck, and shoulders, powerful legs, and curved serrated fangs – which give the machine its name. This machine did not exist when human tribes first settled their respective territories; they only appeared after the derangement.

The derangement refers to a historically important change in the machines’ attitude towards humans. Machines were originally docile and avoided humans, but the derangement made them progressively more hostile. 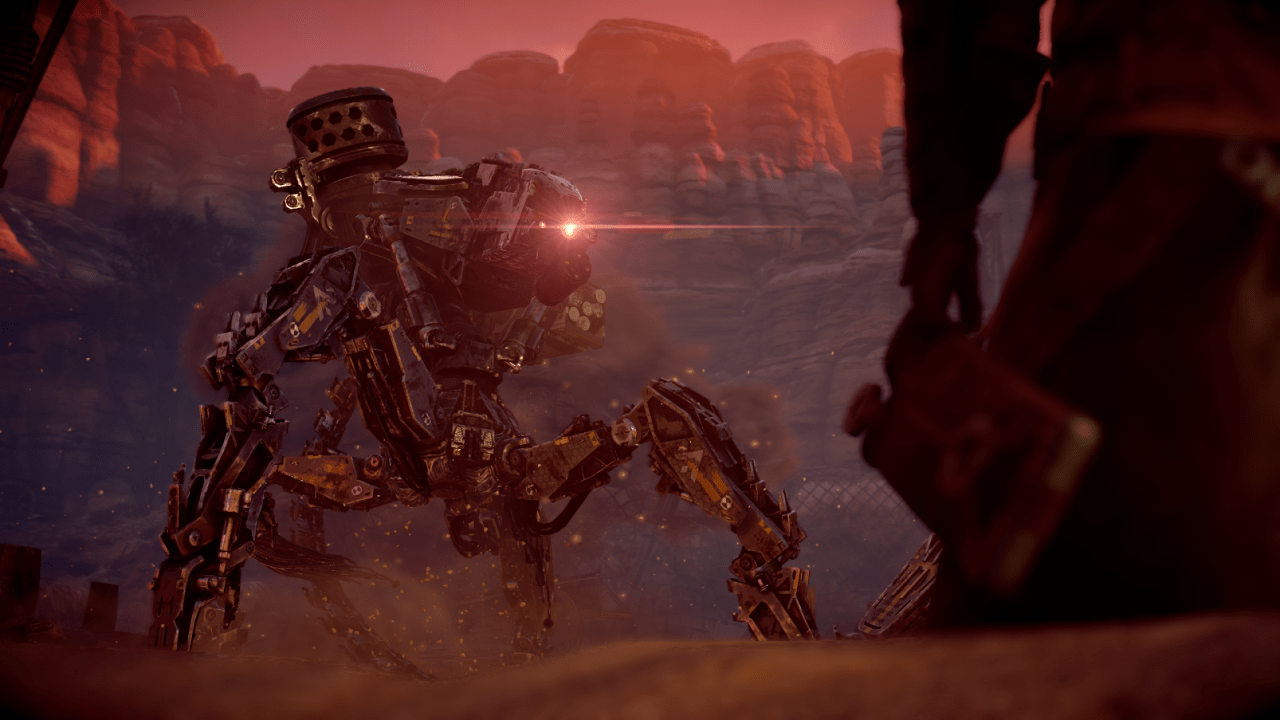 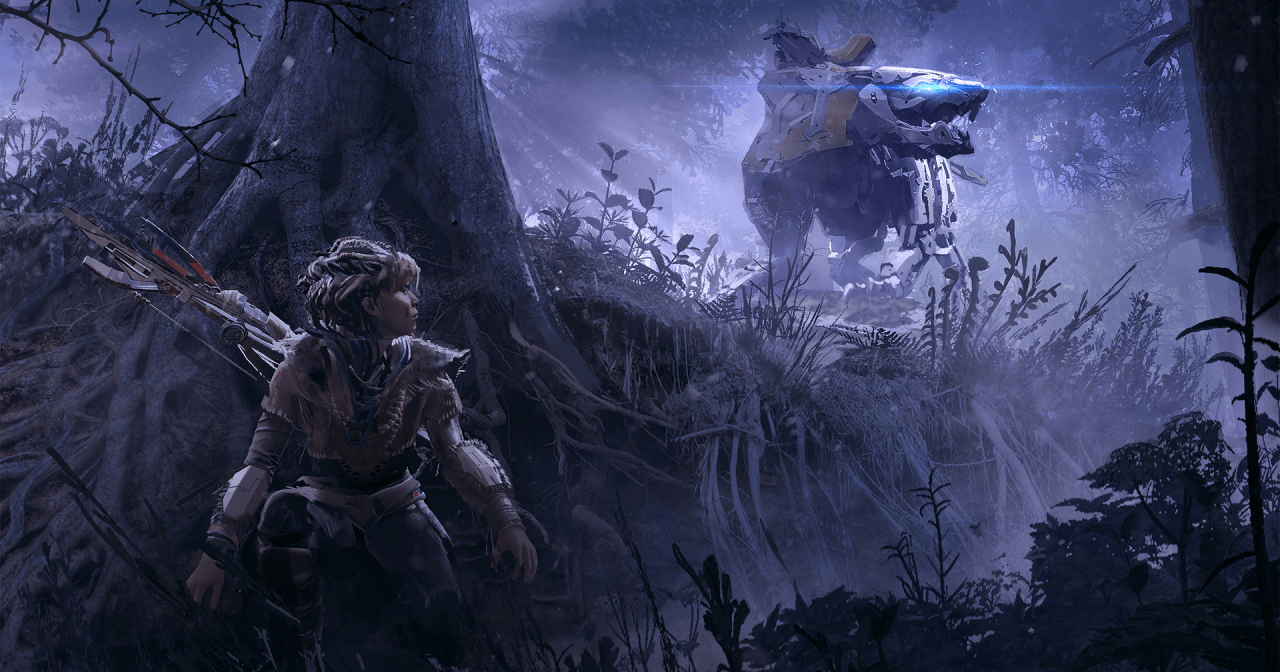 Ravagers are fearsome combat machines that are lightning fast, and heavily equipped. One quickly notices the large cannon on the Ravager’s back, primed to cut down targets. 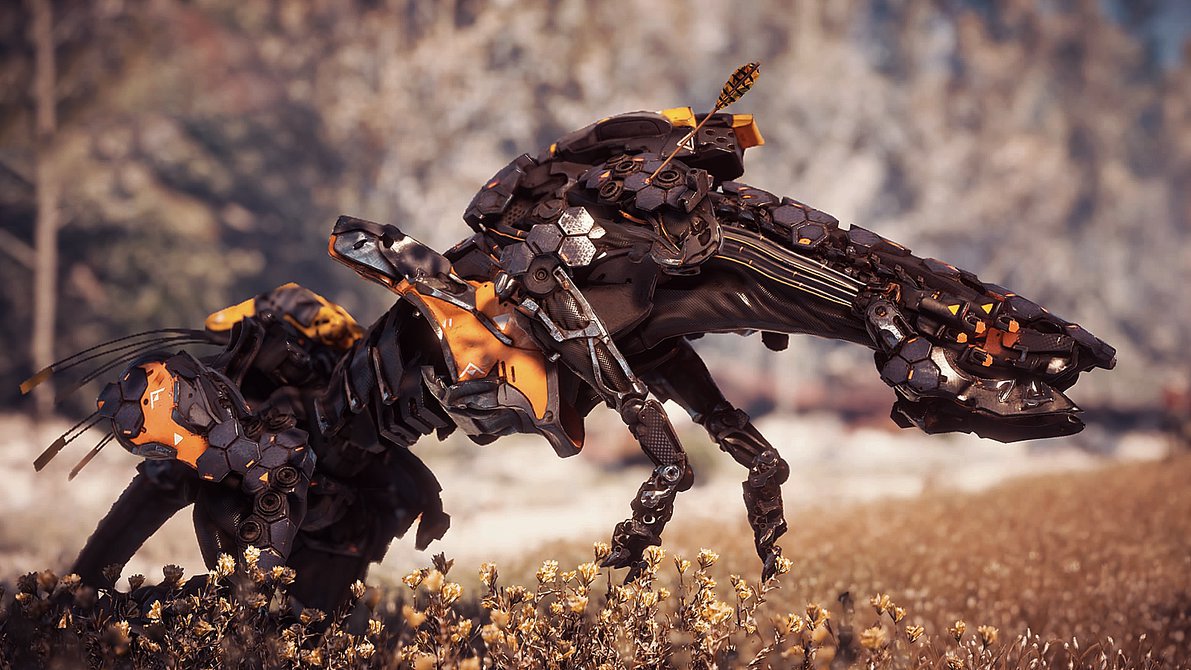 Stalkers have small hexagonal armor plates that fit together in a chainmail pattern, rather than large fitted pieces creatures like Sawtooths and Ravagers have. This chainmail pattern gives the Stalker a sleek and organic shape like a leopard.

Stalkers have the ability to turn invisible, and they like to use ambush tactics to hunt their prey. 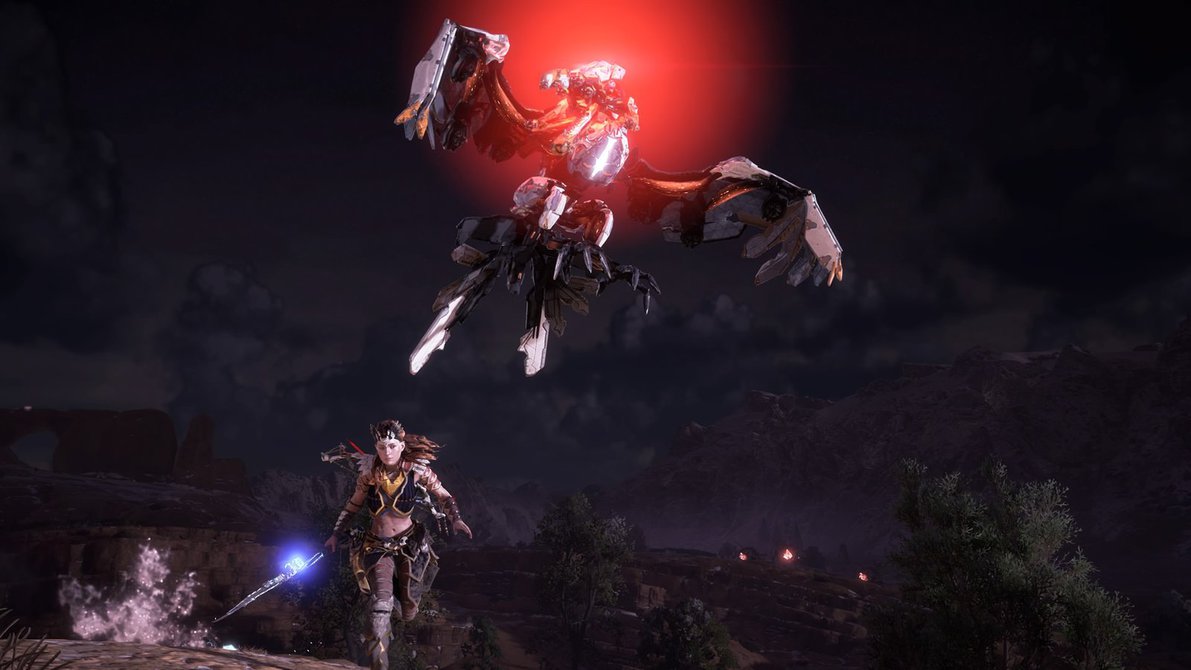 Glinthawks are the smaller class of aerial combat machines. Glinthawks heavily resemble vultures, and their purpose is to scavenge destroyed machines to recover any useful parts for recycling.

Stormbirds are much larger aerial machines, and one of the most dangerous in the game. The curved beak and wing pattern makes its resemblance to the colossal eagle unmistakable. 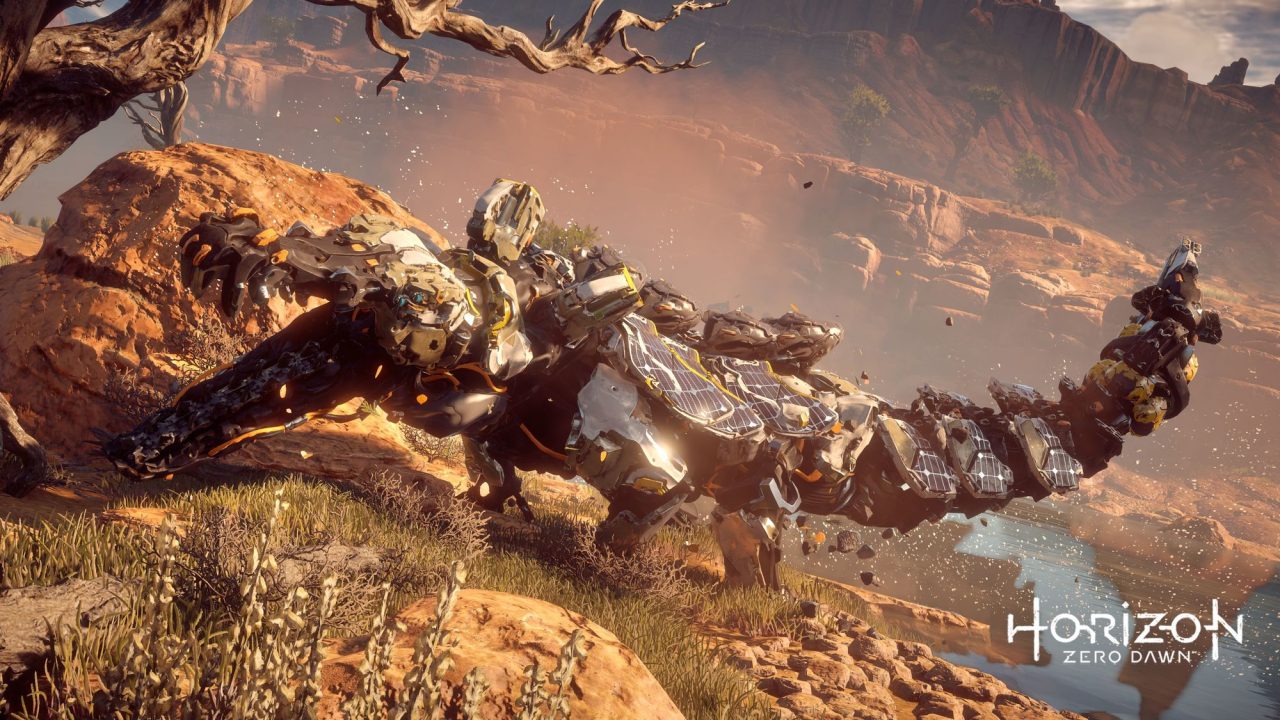 Snapmaws are the only amphibious machine in the game. They were designed to harvest energy, and they feature solar panel platelets across their backs.

They are modeled after crocodiles and behave very much like them by basking in the sun all day. Although, like crocodiles, they are capable of bursts of incredible speed and are very dangerous. 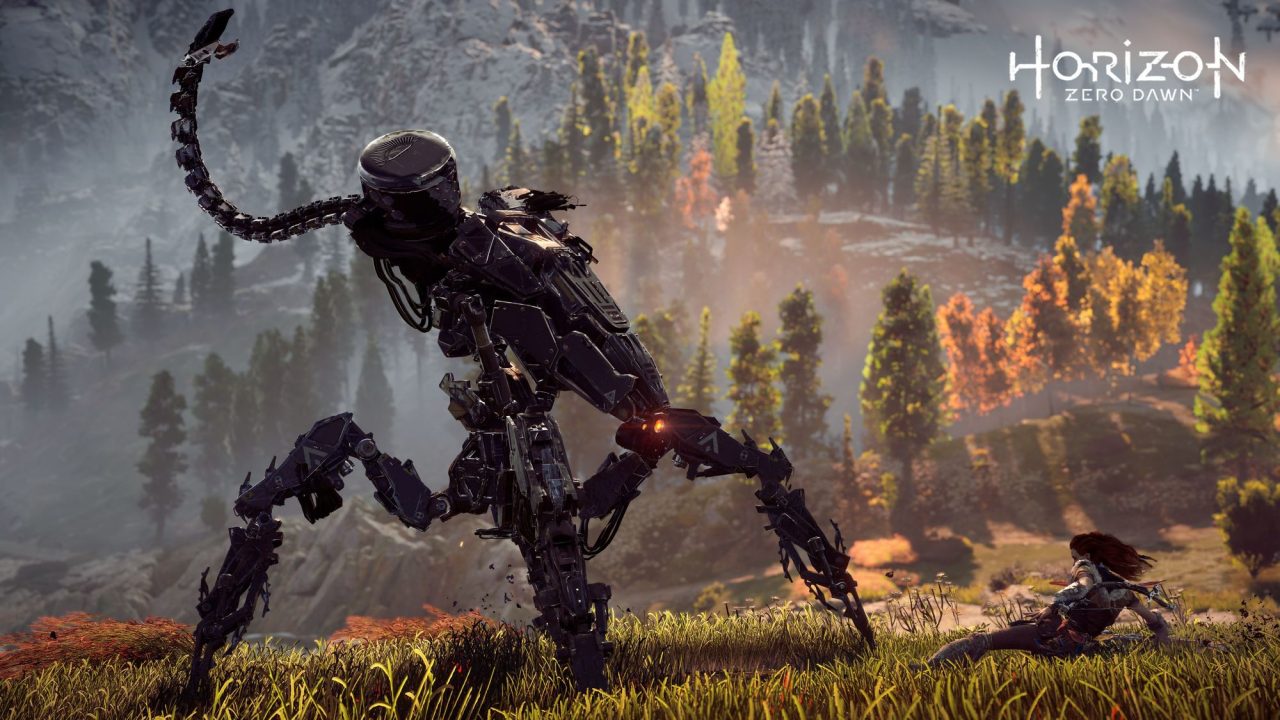 Corruptors loosely resemble black scorpions with its slender legs, angled torso, and long, pointed tail. Corruptors use their tails to poison other machines with “corruption”, which makes them stronger and more aggressive.  This class of machine brought about “the derangement” which affects the machines in Horizon. 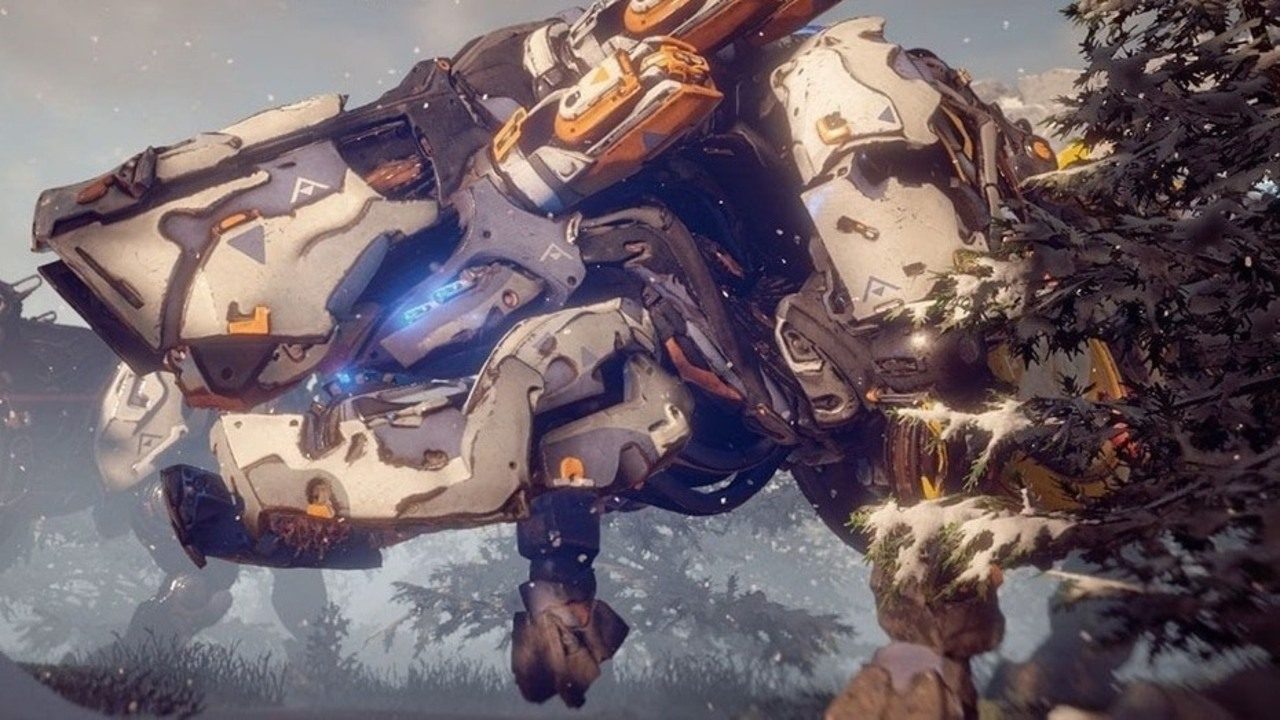 Behemoths are extra large transport class machines that use anti-gravity technology almost like telekinesis to move heavy objects. They were originally designed to help with mining and terraforming activities, but the derangement has turned this beast into a formidable foe. Now it uses its anti-gravity abilities to hurl rocks at humans.

The Behemoth resembles a rhinoceros without the dramatic horn.

Most notably the Realm Razer from Magic The Gathering (which describes the beast as “a behemoth” in the flavor text): 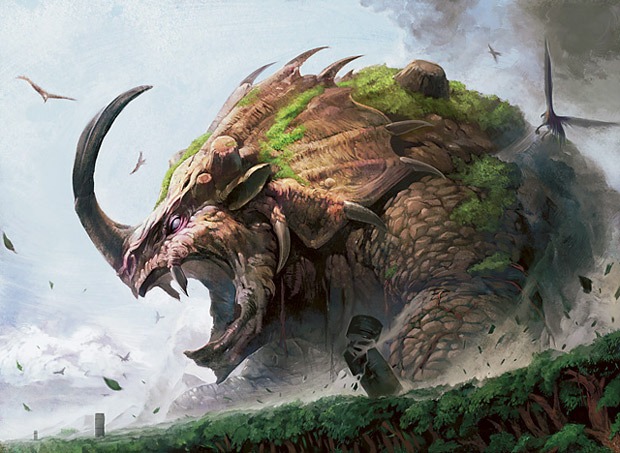 And the behemoths from Final Fantasy: 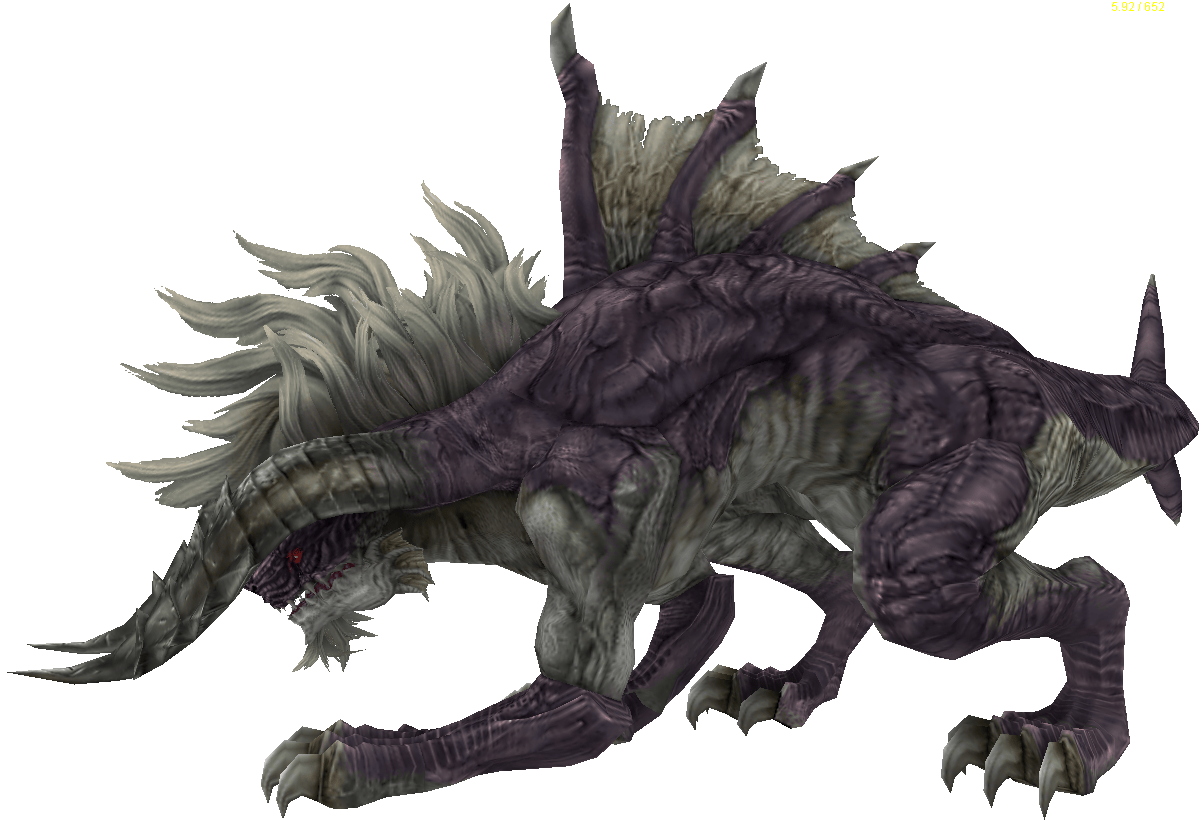 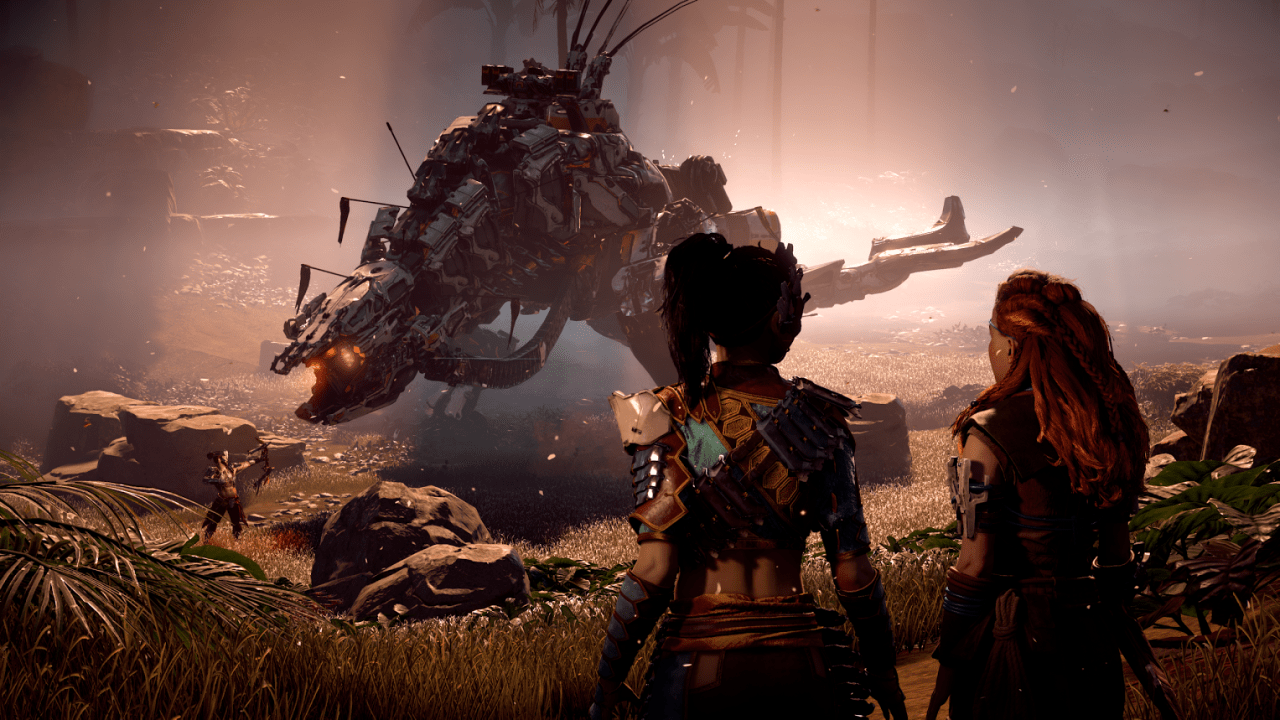 Thunderjaws are an Apex Combat Machine, meaning that it’s one of the largest and most dangerous of all machines in Horizon. It’s a huge bipedal machine that has bulky legs, a long body, and a thick tail resembling a Tyrannosaurus Rex.

In addition to its powerful jaw, it’s equipped with twin cannons on each side of its mandibles and a weapon known as “disc launchers” on each hip.

Like the Sawtooth, Thunderjaws did not exist when humanity first settled into tribes and only appeared after the derangement. 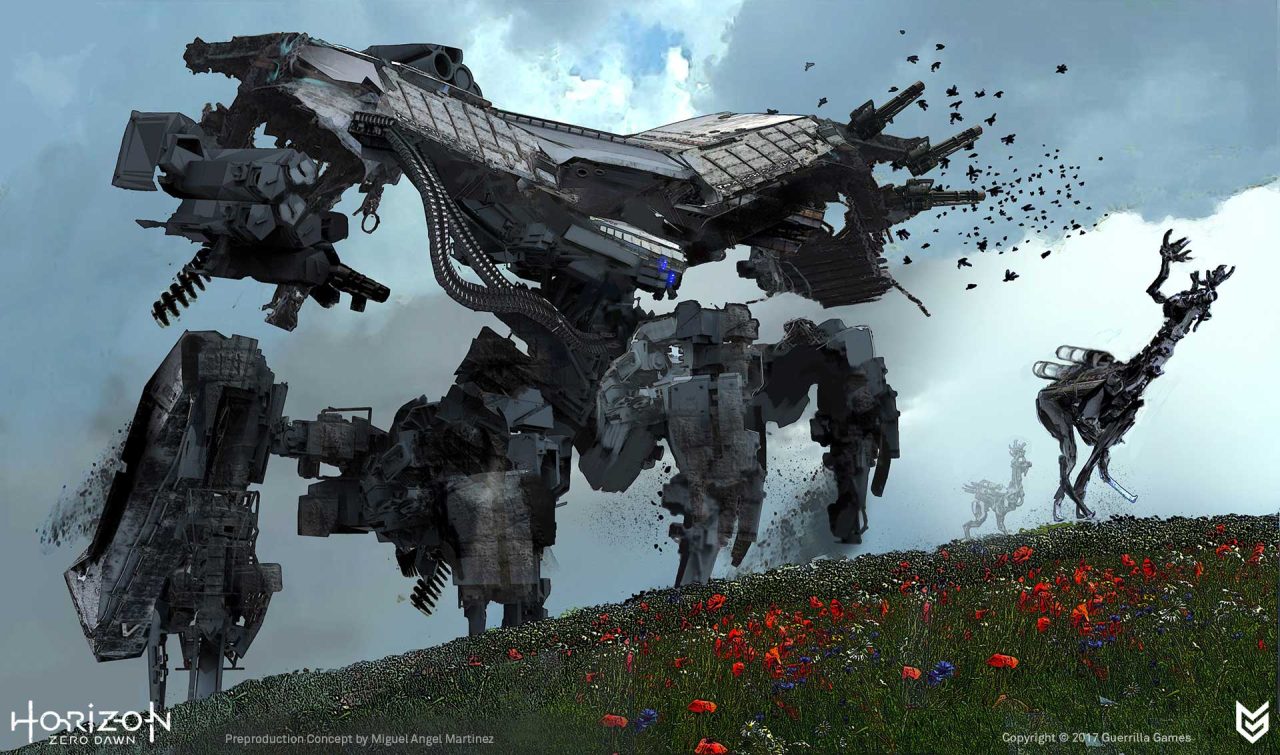 Deathbringers were an original 21st century designed machine. It was designed to overwhelm the enemy with sheer fire power. It’s a very slow machine, but its heavy armor and plethora of heavy turrets, cannons, and guns make up for its lack of speed.

Whether you’re working on a home renovation, commercial construction, or a work of art – Tampa Steel and Supply can help. We stock an extensive selection of metal products, fabrication supplies, and services that can get the ball rolling on your project. If you need help creating a fantastic metal feature, give us a call today or stop by our showroom in Tampa.