Rust, commonly referred to as oxidation, occurs when iron or metal alloys that contain iron, such as steel, are exposed to oxygen and water for a long period of time.

Rust forms when iron undergoes the process of oxidation but not all oxidation forms rust. As stated previously, only iron or alloys that contain iron can rust, but other metals can corrode in a similar way.

Corrosion occurs when an element that easily loses its electrons (like some metals) combines with an element that absorbs extra electrons (oxygen) and then comes into contact with an electrolyte solution (water). The job of the water in the corrosion process is to accelerate the flow of electrons from the metal to the oxygen.

This process is called a redox reaction and is actually two chemical processes that happen at the same time: reduction and oxidation.

Reduction is the name of the chemical reaction that occurs when a molecule gains an electron. This is oxygen’s role in metal corrosion.

Oxidation is the opposite of reduction and is the name of the chemical reaction that occurs when a molecule loses an electron. This is the metal’s role in metal corrosion. Rust and the patina (weird green color) of copper are the visible results of the metals losing their electrons to the air.

Do Copper, Iron, and Aluminum Rust?

Technically, only iron and alloys that contain iron can rust. Other metals, including precious metals like gold and silver, can corrode in a similar way.

What sets certain metals apart, is the duration of time it takes for them to begin rusting or corroding.

Here are a few of the most common metals and how they stand up against rust and corrosion.

Copper does not rust, however, it does corrode. Copper is naturally brown and turns a shade of bright green as it corrodes. While some consider copper’s reaction as tarnish rather than oxidation, the metal still undergoes a similar “rusting” process.

In a natural environment, copper is extremely reluctant to corrode. The type of corrosion that ultimately breaks copper drinking pipes is called erosion corrosion and it only occurs due to exposure to flowing, turbulent water over a long period of time. 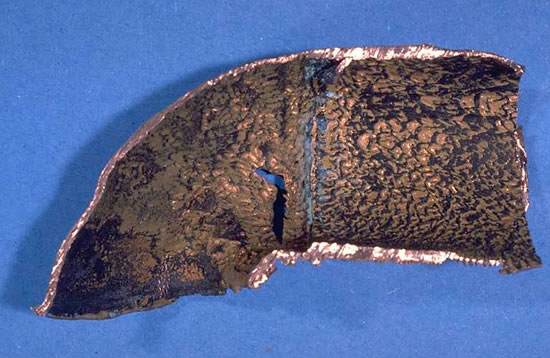 Commonly seen on old pennies, the famous, beautiful green “patina” can actually take up to 20 years to fully form.

It’s one of the few metals that occur naturally as a directly usable metal in nature, as opposed to being mined from an ore (although it can be created in other ways). This, and the fact that copper is very soft and easy to work with, led to it being one of the first metals that people worked with in human history.

In fact, copper was such a big deal that we actually have a period in history called the Copper Age.

Copper is highly conductive to heat and electricity, it’s commonly used in electrical wiring for this reason.

It’s also very low in the reactivity series, a tool in chemistry that is a progression of metals arranged from highest to lowest reactivity to acids, water, extraction of metals from their ores, and other reactions. Because of its low reactivity, a specific alloy of copper (90% copper and 10% nickel) is used for parts on boats that will be exposed to seawater, or as pipes to transport drinking water. If you look around your home or building, you’ll notice that many of your appliances use copper pipes to bring water in or out.

According to the US Department of Housing and Urban Development, the average copper water pipe should last 50-70 years.

Yes. Remember that technically only iron and alloys that contain iron can rust.

Iron will also rust quickly if it’s exposed to high temperatures. Extreme temperatures can alter the metal’s chemical makeup, which makes it extremely prone to recombining with oxygen in the environment.

Aluminum is one of the most commonly used metals on the planet, and it’s arguably most famous for not rusting. Aluminum doesn’t rust, only iron’s specific oxidation is called rust and there is no iron used when creating aluminum. However, like all metals, Aluminum is susceptible to corrosion.

Aluminum comes from a mineral called bauxite. Bauxite is most commonly found in sub-tropical places like Africa, the West Indies, South America, and Australia – although there are some small deposits in other places like Europe. Australia is the largest producer of bauxite, supplying about 23% of the world’s global production.

This bauxite is then processed into aluminum oxide, which just consists of atoms of aluminum and oxygen bonded together.

The aluminum oxide then has an electrical current running through it, which separates the different components from each other. Oxygen bubbles form at one end, and pure molten aluminum droplets collect at the other end.

About 4-5 tons of bauxite is processed into 2 tons of aluminum oxide, which creates 1 ton of pure aluminum.

Aluminum corrodes much more slowly than other metals like iron. According to Stanford, the reason why aluminum doesn’t corrode as easily as other metals is because of the special reaction it has with water.

Normally, when water comes into contact with metal it encourages the metal to give up its electrons even faster to the oxygen around it.

Aluminum has a special reaction to water though. When water touches aluminum, the aluminum and the oxygen atoms (contained in the metal – not the oxygen in the air surrounding it) move further apart from each other.

They’ll wind up almost 50% further away from each other than where they started. This reaction of moving away changes the molecular structure of the aluminum just enough that it becomes chemically inert, meaning it doesn’t corrode as easily.

How to Prevent Metals From Rusting

Rust is a naturally occurring chemical reaction. Despite the fact that some metals will rust faster than others, it shouldn’t deter you from utilizing these metals for certain uses. There are many ways you can prevent your metals from rusting, such as metal paints and coatings, sacrificial barriers, barrier films as well as numerous anti-rust solutions and tin plating. Each method utilizes different compounds and materials to create a protective barrier between the metal and the elements that cause rust and corrosion.

Learn which metals DO NOT rust here.

For more information on how to prevent rust, check out our blogs: How to Keep Steel and Iron From Rusting and Anti-Rust Solutions for Your Stainless Steel Products

Visit Tampa Steel and Supply for Quality Steel and Metal